Teaching in the Clouds 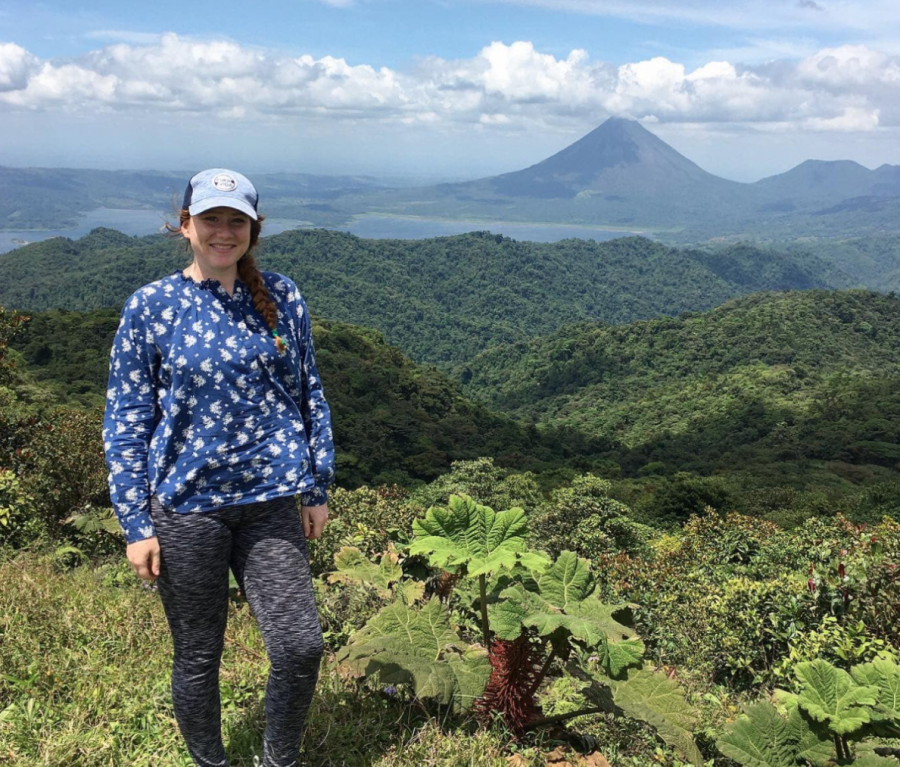 One of the many hikes one can take from Monteverde, Costa Rica: this one overlooks the Arenal Volcano and is surrounded by the lush greenery that Costa Rica is most known for.

Ms. Bakke prepares her notes, and walks through the lush jungle on the way to her classroom. She hears the noises of the monkeys. She sees big tropical butterflies, and feels the moist air run over her skin. She touches the soft big leaves and watches the little water droplets run off of them as she becomes distracted by a large vivid rainbow on her journey to her classroom.

This is her life now. She smiles.

Lori Bakke moved to Costa Rica for the 2018 school year leaving her English teaching job at The Colony. She taught at The Cloud Forest School in Monteverde, Costa Rica. It was built off 106 acres of rainforest where she taught seventh through eleventh grade English. A year later in March 2020, Covid-19 caused the high school in Costa Rica to close down. After closing down, English teacher Lori Bakke made the decision to return back home to The Colony where she previously taught for five years before deciding to move to Costa Rica.

It all began when she traveled to Costa Rica in 2017 to visit. She fell in love with the country, it was very safe and beautiful. It was the exact place she knew she wanted to move. In 2018, she looked around for opportunities at schools to teach in Costa Rica, and decided she wanted to teach English and learn Spanish.

On her plane ride to Costa Rica she watched as the landscapes changed with the descent into a lower latitude. She admired the beauty from the window, ready for her life. All she could think about was the lush jungles, glistening beaches, spectacular wildlife, and innumerable adventure activities she would get to experience. Her fresh start was about to begin.

She was happy. She felt like she was reaching one of the highest goals in her life. The view out the window gave her an anxious and exciting feeling. It was the highest her soul had felt in a while.

“It was so beautiful, I was so excited,” she said. “This felt like the right place for me to be, to learn, grow, and live a new type of life I couldn’t live back in Texas.”

While walking to her classroom, she would have to walk through the rainforest. In the rainforest she would see animals like Red-Eyed Tree Frogs, Three-Toed Sloth, colorful Toucans, Agoutis, Pistoes and Motmots. She also lived on high mountains which are located inside of the cloud forest.

Inside the cloud forest she would see animals like bats, White-faced Capuchin Monkeys, Walking Sticks and tropical butterflies like her favorite- the Morpho butterfly. The environment was so beautiful and different from many things that she had ever experienced.

Bakke said the cost of living in Costa Rica is cheaper than in the United States. For a one bedroom apartment the prices are between $200-$210, including utilities. Bakke didn’t have a washer, dryer, air conditioning, nor dishwasher. She would wash dishes by hand, use electric fans to stay cool, and use a manual washing machine (which she dubbed “the slosher”) that required a hose and a lot of time to wait to move the clothes from the washing basin to a separate spinner and back. Her life in Costa Rica was different from the one she had left behind, but she still loved it. It was starting to feel like home.

Her new adventure was full of excitement, and shock. One day, during school hours the staff and students were told to evacuate the classes in case one of the trees in the rainforest fell. She walked into the front of the school, and saw a big tree fall over the top of the art classroom with a group of 5th graders inside of it. The whole art building was a complete disaster. The ceiling was destroyed, desks were broken in half, but thankfully, no one was seriously injured.

“I didn’t think much of it, I thought they were just being dramatic,” she said. “I saw the art room and it was the craziest thing that I’ve ever seen. It was just essentially this huge hole in the art building so much of everything was destroyed.”

Her classroom in Costa Rica didn’t have projectors, copy machines or internet. To read emails, she would have to walk through a path in the rainforest that lead to the front office to access the internet. The staff only had two printers that everyone shared. The school also didn’t have technology for students or teachers, students would have to do their work on paper.

“It was so crazy and different but I had an easy time with getting adjusted”, she said. “I knew everything in Costa Rica wasn’t going to be exactly the same as the USA, I expected this kind of experience.”

She taught at a bilingual school so all the students spoke some English, other students were more fluent than others. A lot of the students grew up hearing English and were being taught English as they grew up in different grades from other American teachers.

“Teaching them was quite easy but sometimes difficult because it’s not their native language”, she said. “It can be a challenge but not impossible, I love teaching, so I’ve always been patient and worked with them. I loved having small class sizes and was able to build such a strong relationship with each of my students – some who were even neighbors to me in our small town.”

She enjoyed going on walks and watching the red sunset that hovered close to the big blue ocean over the Gulf of Nicoya.

“Costa Rica has the best sunsets, literally”, she said. “Everything in Costa Rica is so beautiful, you will fall in love with the forest, the animals-just everything. People will stop what they are doing to grab a blanket, head up the nearest hill, to get the best view of the sunset.”

The typical day in Costa Rica for Bakke started at six in the morning. Even that early, the sun beamed because it’s closer to the equator. Bakke experiences the early sun rises, and early sunsets.  For travel she had a motorcycle that she could  ride to her class or up the mountains. After a long day of working, she would hang out with friends to get some Costa Rican food like her favorite dish called “Gallo Pinto,” a dish made with rice and beans.  Later in the evening, she would gather around with many other people to watch the sunset.

“It was very amazing because in the USA you don’t just gather around to watch a sunset”, she said. “There, it was so beautiful because we could overlook the ocean and watch it. I miss it so much.”

Bakke became attached to Costa Rica, and she never wanted to leave. She knew she made a big change in her life by moving overseas. She missed her loved ones in the United States, but being in Costa Rica is what made her happy- she cherished every moment of being there. Her soul became happier and her world became

brighter. Nature became her greatest friend, Costa Rica was like a place she had never been before, a home she never knew she had.

“After being there for a while, I got attached”, she said. “I started to feel so connected to everything, I never wanted to leave. It is such a beautiful place.”

In March of 2020, her school shut down for spring break. That break became longer. And longer. COVID-19 had shut down her school, and altered her life. The school never reopened that school year.

“It’s actually sad when things like that happen when you’re an international teacher,” she said. “We didn’t know that our last day with our students was going to be our actual last day.”

After the Covid-19 pandemic breakout in Costa Rica during 2020, the schools were shut down so she made a choice to come back.

After coming back, she was rehired at The Colony High School and is currently continuing her career as an English teacher. She loved Costa Rica so much that if it was up to her then she would still be there. She didn’t know what was going to happen next now that she’s back in the USA, she was prepared and ready for anything that came her way.

Staff and students are thankful to have her back on campus.

“I’m super excited that she’s back,” Assistant Principal Lindsay McLennan said. “She’s an incredible teacher, every time I’m in her class, her kids are super engaged. You can tell they enjoy being with her.”

Bakke misses walking through the jungle and watching the golden sunsets, but she is content being back- for now.

“I’m happy to be back to my original home,” she said. “Everything feels almost normal again. I can’t complain, my life is happy.”